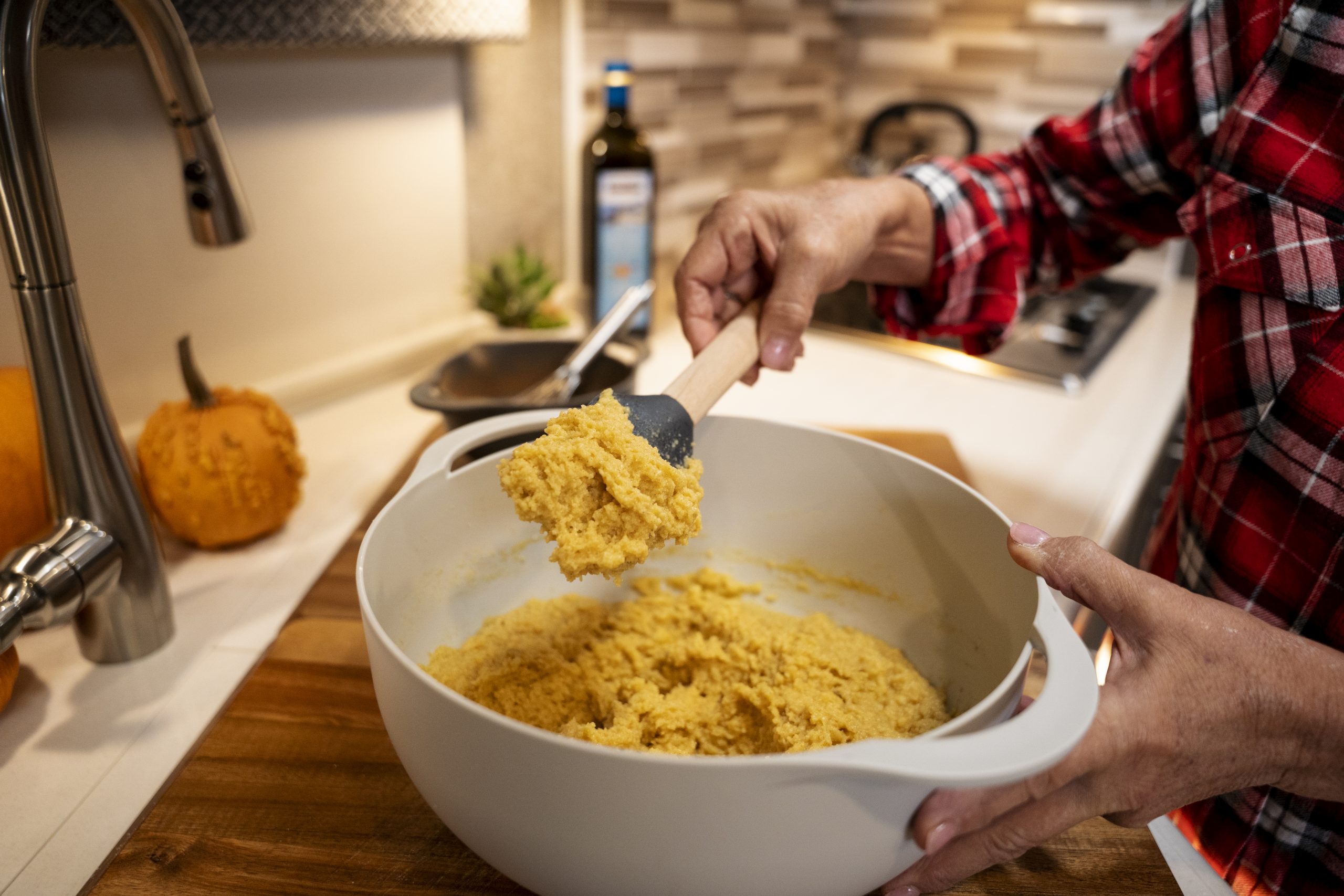 Satisfy your sweet tooth and do so gilt-free with this delicious Almond flour cinnamon swirl bread recipe. Great for any RVing trip, it stores easily, is perfect for breakfast, snacks or dessert and can be dressed up with coffee or ice cream, depending on when you indulge.

This recipe is part of Rec Van’s YouTube cooking series: Get Cookin’ RV Style. Each road recipe in this series has a short cooking video hosted by an engaging guest chef, who gives you a deeper look at how to make the recipe. Be sure to subscribe to our YouTube channel for notifications when each new recipe is released.

1. In a small bowl, add the granular sweetener for the cinnamon swirl.
2. Then add the ground cinnamon for the cinnamon swirl.
3. Whisk together the cinnamon and sweetener until well incorporated. Set aside.
4. In a separate medium mixing bowl, add the eggs.
5. Add the granular sweetener for the bread mix.
6. Add the melted butter or melted coconut oil. If using melted coconut oil, ensure that the oil is not burning hot, or it will ‘cook’ the eggs and create lumps. Ideally, all of your ingredients should be roughly at the same temperature (close to room temperature). Cold ingredients just out of the refrigerator (such as eggs and almond milk), will solidify the coconut oil.
7. Add the almond milk, vanilla extract and whisk everything together well. Set aside.
8. In a separate large mixing bowl, sift-in the almond flour. It’s best to sift almond flour using a wire strainer in order to remove any lumps.
9. Add the coconut flour, baking powder and the cinnamon.
10. Whisk the dry ingredients together well to combine them evenly.
11. Pour the reserved wet ingredients from the medium mixing bowl into the dry ingredients in the large mixing bowl.
12. Stir everything together with a mixing spoon until it forms a thick cake batter with no lumps. Combine for at least 2 minutes to make sure the coconut flour fiber absorbs the moisture well.
13. Preheat the convection microwave oven to 325 degrees Fahrenheit (or a standard oven to 350 degrees Fahrenheit). Make sure the center rack is installed within the convection microwave oven, to allow hot air to circulate around the bread as it bakes. Note that the temperature of 325 degrees takes into account the 25-degree reduction in baking temperature often recommended by convection microwave oven manufacturers in their Owner’s Manuals.
14. While the oven preheats, line the bottom and sides of the loaf pan(s) with slightly overhanging strips of parchment paper (to be able to easily pull each baked loaf out of the pan).
15. Spoon a small amount of batter into the bottom of each loaf pan, using a little less than half of the overall quantity of the bread mix.
16. Spoon some of the cinnamon swirl mixture onto the batter in each loaf pan, using roughly half of the overall quantity (saving half for on top of the bread).
17. Spoon the remainder of the batter into each loaf pan, and smooth out the top(s) with a spatula.
18. Spoon the remaining half of the cinnamon swirl on top of the bread.
19. Draw a knife carefully through each bread and swirl it to create a marble effect.
20. Bake the bread for 15 minutes at 325 degrees Fahrenheit (350 degrees in a standard oven).
21. After 15 minutes, lower the convection microwave oven’s temperature to 300 degrees and cover each loaf pan with a loose piece of aluminum foil, shiny side up. The foil will help prevent the top from burning while the middle of the bread slowly bakes.
22. Continue baking the bread for 30-45 minutes (45-60 minutes in total), or until a toothpick inserted in the center comes out dry and mostly clean. Start checking the bread at 30 minutes to make sure you don’t over bake it. Note that convection microwave ovens can vary substantially, so you may need more or less time baking, depending on your specific convection microwave oven.
23. Let the bread cool in the pan for 10 minutes after removal from the oven.
24. Carefully remove the bread from the pan by pulling the parchment paper up.
25. Let the bread cool on a wire rack for 2 to 3 hours before slicing or wrapping it in plastic wrap for freezing. You can speed the cooling up by placing the bread on a wire rack in a refrigerator for 90 minutes.

Note: You can store and enjoy this bread for up to a week, or freeze it for several months. 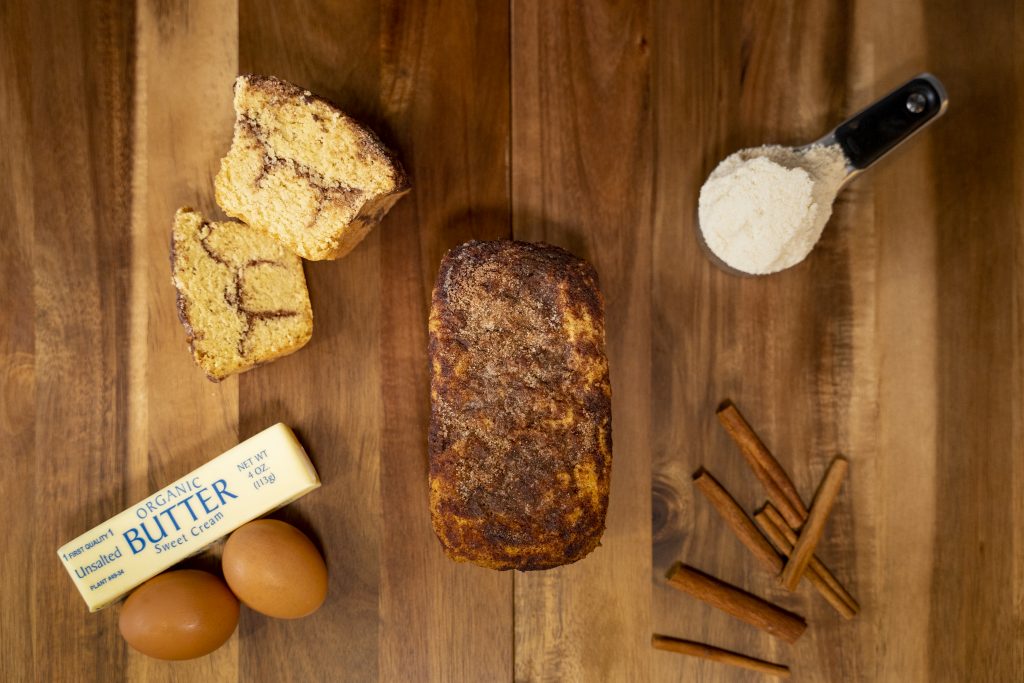 Looking for more Get Cookin’ recipe videos to change up what you eat while RVing? Click here for our YouTube playlist.

10 Adventure Books to Read on your Summer Road Trip

Is Van Life Really as Good as it Sounds?