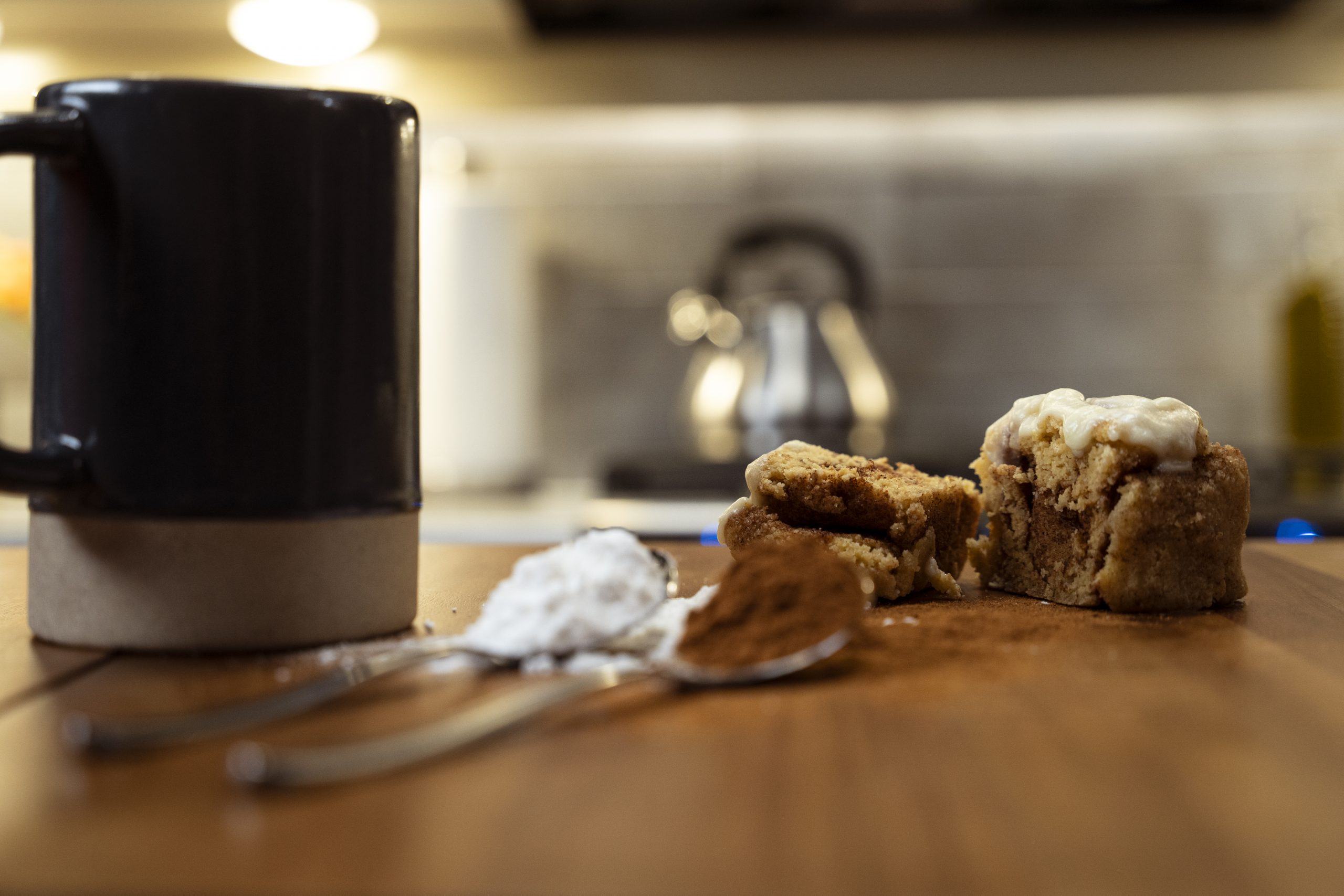 This Keto Mug Cinnamon Roll is perfect for an RV kitchen that doesn’t have a traditional oven or convection microwave oven, but just a standard microwave. It’s a low carb and gluten free alternative to the classic cinnamon rolls we all love, while supporting a Keto diet. It’s also a great way to teach your kids or grandkids the art of cooking by showing them the basics with this small and simple dish.

This recipe is part of Rec Van’s YouTube cooking series: Get Cookin’ RV Style. Each road recipe in the series has a short cooking video hosted by an engaging guest chef, who gives you a deeper look at how to make the recipe. Be sure to subscribe to both our My Rec Van blog and our YouTube channel for notifications when each new recipe is released.

Based on a recipe by The Diet Chef

1. Separate the egg yolk from the egg white over a mug or cup.
2. In a microwave-safe kitchen shot glass (or mug), melt the 1 Tbsp of butter in the microwave (about 20-30 seconds in a 1,000-watt microwave).
3. In a small to medium mixing bowl, whisk together the egg yolk, melted butter and vanilla extract until combined.
4. Sift in the almond flour, powdered sweetener, xanthan gum, baking powder and salt.
5. Mix everything together with a spatula until a dough with a sticky and slightly crumbly consistency forms. Once it does form into a dough, use your hand to form it into a ball.
6. In a small dish/cup/mug, mix together the golden/brown sweetener and the ground cinnamon. Set aside.
7. Lay out a small sheet of parchment paper on a flat surface or cutting board. Then place the ball of dough on top of it and press the dough out into a roughly 1-inch wide by 8- to 9-inch long thick strip of dough.
8. Spray the top of the strip of dough with avocado oil spray.
9. Sprinkle the cinnamon-brown sugar mixture on top and press it into the dough.
10. Carefully roll the dough up to form a cinnamon roll. It will probably crumble or break a bit as you roll it, but you can smooth it out with your finger to keep it together.
11. Coat the bottom half of a microwave-safe mug or ceramic ramekin with avocado oil spray.
12. Carefully place the cinnamon roll in the mug or ramekin.
13. Microwave on high for about 45 – 90 seconds (about 65 seconds is good in a 1,000-watt microwave). Adjust timing in 10-second increments to be slightly shorter or longer depending on the output wattage of your microwave. Try not to overcook it because it will dry it out.
14. While the mug cinnamon roll is baking in the microwave, mix up the powdered or confectioner’s sweetener with the heavy whipping cream in a small dish or mug, until they form a thick, creamy icing.
15. Let the mug cinnamon roll cool for 1-2 minutes before icing (and eating), so the icing doesn’t melt too much and you don’t burn yourself.
16. Spread or pour the icing on top of the cinnamon roll.

Looking for more Get Cookin’ recipe videos to change up what you’re eating while RVing? Click here for our YouTube playlist.

How to Make Your New Camper Van Feel Like Home

Plan Ahead for Labor Day 2021: Reserve Your Campsite Now